Precious metal producer SSR Mining Inc (NASDAQ:SSRM) is seeing an uptick in bullish options activity today, following the stock’s addition to the Russell 1000 Index (RUI) and broad-market Russell 3000 Index (RUA). Separately, the company responded to recent Turkish media reports that indicated a possible temporary pause in operations in its Çöpler mine, noting it was seeking a formal response from the Ministry of Environment regarding these reports. This news is weighing on SSRM, which was last seen down 9.2% to trade at $17.11.

On the charts, the equity earlier fell to its lowest level of trading since October when it briefly dropped below the $15 level Now, SSRM is down 3% year-to-date, though it’s managing to cling to its 9.5% 12-month lead. In addition, SSR Mining stock is on track to close below its 320-day moving average for the first time since February. 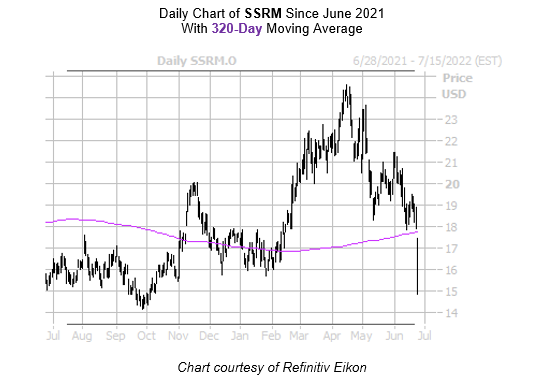