Copper has suffered a massive decline over the last few months, shedding more than 20%. The metal is used for many things, including factories, electronics, and power generation; and because of its wide use across many sectors, copper is often considered a leading indicator for economic activity. Naturally, this could be an argument for further declines in stocks. This week, I’m looking at historical copper prices to see if sharp sell offs have led to a weak stock market in the past. 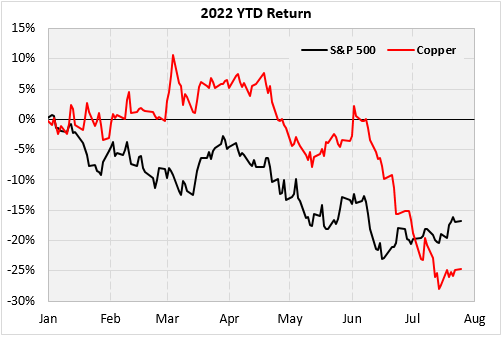 Going back to 1980, I found times that copper fell by 20% over a two-month timeframe. There were 15 occurrences, and the table below summarizes how the S&P 500 Index (SPX) performed afterwards. Fears that copper crashes are a leading indicator of stock market weakness are misplaced. Stocks have done fine after these occurrences. Six months after copper collapsed, the SPX averaged a return of just over 9%. The typical six-month return for the index was about 5%. A year after a copper crash, the stock index averaged a gain of 12.6%, which slightly outpaced the typical return of 10.4%. 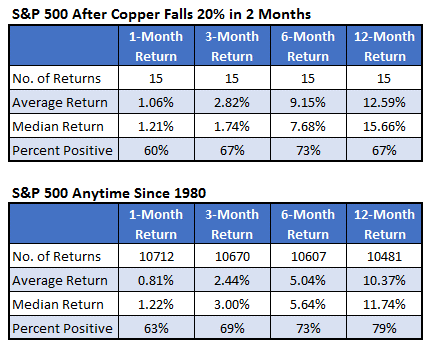 Historically, after copper falls like this, the metal itself has done quite well. After copper fell by 20% over a two-month time frame, it averaged a return of 11% over the next six months, with 80% of the returns positive. Normally, over this time frame, copper averaged a gain of about 4%, with 52% of the returns positive. Sharp pullbacks in copper, like this, have marked good buying opportunities. 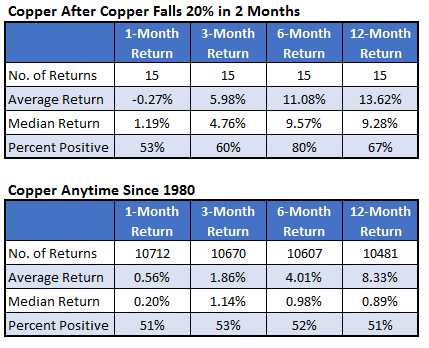 One thing about this recent drop in copper prices is that it was accompanied by a big drop in stock prices too. There were five instances since 1980 that copper fell by 20%, and stocks fell by at least 10% during that same time period. The table below shows the return of the SPX after each of these instances. The last time was during the Covid-19 crash, and stocks were fantastic over the next year. In three of the four other times we’ve seen this, the stock index gained at least 20%. The one time it dropped was during the financial crisis in late 2008. 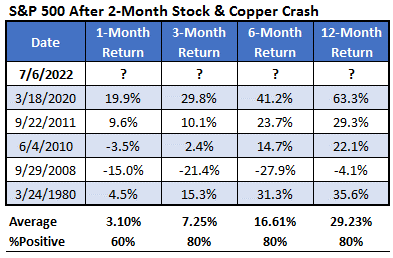 This next table shows how copper has performed after instances when copper and stocks both fall big time over a two-month period. Copper averaged a loss over the short term, one and three months. Over the next six and 12 months, however, copper has had bullish returns, with an average that’s similar to the average stock returns in the table above. 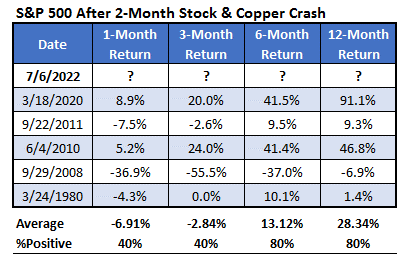 I looked at it one more way. Copper is down on the year by nearly 25%. The data I’m looking at goes back to 1980, and that’s the biggest drop in copper at this point in the year. Below is a list of years in which the metal was down by double-digits. Then I have the rest of year returns for both the SPX and copper. The bolded rows are ones where stocks were also down significantly year-to-date. The last two times copper was down double digits at this time of year, stocks and copper both fell further the rest of the year. Looking at all instances, stocks have tended to do better the rest of the year as measured by average return (6.7% vs 3.3%). Copper has tended to do worse rest of year (1.0% vs 1.55%). 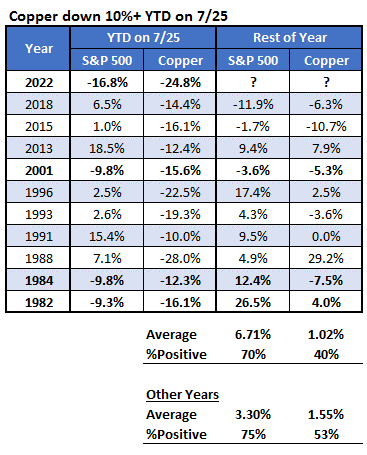