United Airlines Holdings Inc (NASDAQ:UAL) just announced it’s cutting 50 domestic flights per day, or roughly 12% of its flights, out of the Newark Liberty International Airport in an effort to reduce delays caused by airport construction and capacity issues. The cuts will be begin on July 1. This move comes one week after Transportation Secretary Pete Buttigieg reached out to CEOs of top airlines to ensure the same disruptions seen recently don’t continue over the remainder of the summer. 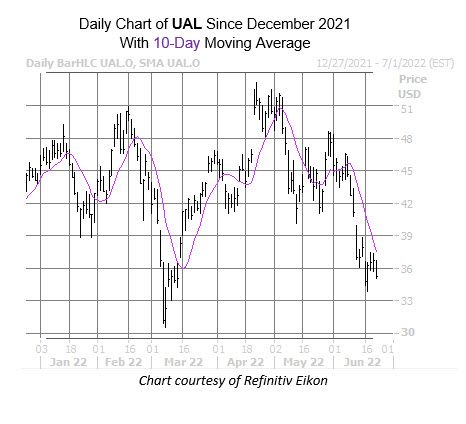 Short-term options bears have targeted UAL of late. In fact, these traders haven’t been more put-biased over the past year, per the security’s Schaeffer’s put/call open interest ratio (SOIR) of 1.39, which stands in the highest percentile of its annual range.

Short interest has also been on the rise, up 15.3% in the last two reporting periods. The 23.04 million shares sold short make up 7.1% of the stock’s available float, or a little under two days’ worth of pent-up buying power.

Analysts, on the other hand, are split on the security. Of the 14 in coverage, seven say “buy” or better, and seven say “hold” or worse. Meanwhile, the 12-month consensus price target of $59.62 is a 69.6% premium to current levels.