Breaking down the historically bullish trendline flashing for Ulta stock

This commentary first appeared on Forbes Great Speculations, where Schaeffer’s Investment Research is a regular contributor.

After staging an impressive post-earnings pop in late May, the shares of Ulta Beauty Inc (NASDAQ:ULTA) spent the former half of this month consolidating just below the $430 level before losing some of this steam as June volatility wore on. Compared to the rest of the market, ULTA has done relatively week for itself, though. The stock still sports a 14% year-over-year lead, and has only shed a slim 4.9% in 2022. Plus, several levels of support have emerged on the charts, including a former ceiling at the $385 area, as well as historically bullish trendline.

To be more specific, the cosmetics stock just pulled back to its 260-day moving average after a lengthy period above the region. A look at a study from Schaeffer’s Senior Quantitative Analyst Rocky White shows two similar moves occurring over the past three years. One month after both these instances, ULTA was higher, averaging a return of 7.8%. A similar jump would put the equity just below the $424 level. 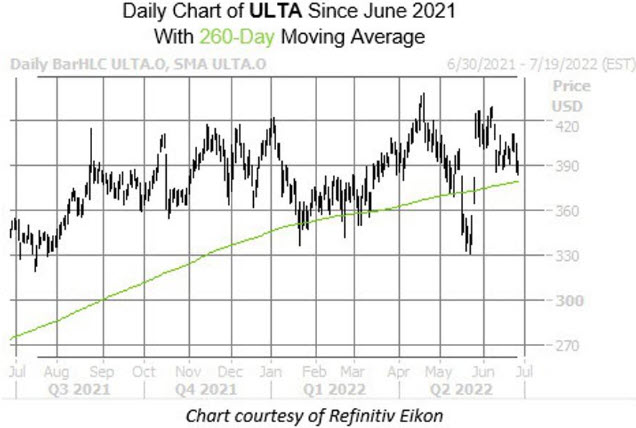 Ulta Beauty stock is already on the up-and-up, last seen 1.7% higher to trade at $392.52. An upgrade from Raymond James to “strong buy” from “outperform” is likely putting some wind in the security’s sails, as the analyst also lifted its price target to $485 from $475. More analysts could follow Raymond James’ lead, as six of the 22 in coverage still considered ULTA a “hold” coming into today.

An unwinding of pessimism among options traders could put additional wind in the stock’s sails. At the International Securities Exchange (ISE), Cboe Options Exchange (CBOE), and NASDAQ OMX PHLX (PHLX), ULTA sports a 10-day put/call volume ratio of 2.21, which sits higher than all but 2% of readings from the past 12 months. In other words, options traders have been picking up puts at a quicker-than-usual clip.

Speaking of, speculating on Ulta stock’s next move with options may be the way to go. The equity’s Schaeffer’s Volatility Index (SVI) of 39% sits in the relatively low 27th percentile of its 12-month range, meaning options traders are pricing in low volatility expectations for the stock right now.