Insurance name Unum Group (NYSE:UNM) is up 1.4% at $37.82 at last check, after earlier hitting a roughly three-year high of $38.13. The security has been tearing up the charts since bouncing off a floor at the $31 region, and last week blasted through the 40-day moving average, which had been pressuring shares since mid-June. Now up 54.5% year-to-date, while eyeing its fifth-straight gain, UNM could enjoy more tailwinds going forward, given this latest peak comes amid historically low implied volatility (IV) — a combination that has been bullish for the stock in the past. 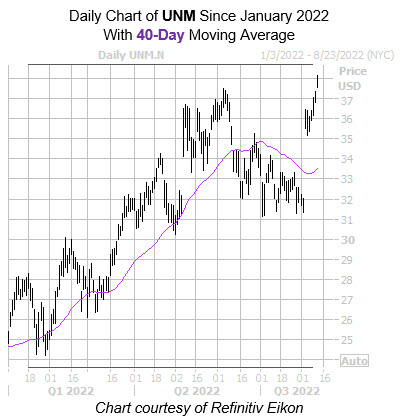 According to Schaeffer’s Senior Quantitative Analyst Rocky White, there were three other instances over the past five years when the equity was trading within 2% of its 52-week high, while its Schaeffer’s Volatility Index (SVI) sat in the 20th annual percentile or lower — as is the case with UNM’s current SVI of 33%, which sits in the 15th percentile of its 12-month range.

The security was positive one month later after these signals 67% of the time, averaging a return of 2.6%. A similar move would place Unum stock just shy of the $40 level for the first time since October 2019.

There’s plenty of room for optimism to grow among the brokerage bunch, which could push shares even higher. Of the nine analysts covering UNM, seven still carry a tepid “hold” or worse rating.