Robinhood Markets Inc (NASDAQ:HOOD) is up 11.8% at $10.31, after the trading platform reported second-quarter losses of 34 cents per share — slightly less than the 37-cent loss anticipated by analysts — and a 44% decline in revenue due to a dip in trading activity. What’s giving the shares a boost, however, is the company slashing 23% of its workforce, as it becomes one of the various fintech names announcing job cuts in anticipation of a recession.

During the past 50 days at the International Securities Exchange (ISE), Cboe Options Exchange (CBOE), and NASDAQ OMX PHLX (PHLX), traders have purchased more calls than puts, driving the put/call volume ratio for that time period to 2.64. This ranks in the 85th percentile of its annual range, showing a strong demand for HOOD calls.

Today, 119,000 calls and 85,000 puts have been exchanged, with options volume running at five times the intraday average. The weekly 8/5 9.50-strike call is the most active option, followed by the weekly 8/5 8.50-strike put, with new positions being opened at the latter.

Though shorts appear to be in covering mode, with short interest down 20.3% during the past month, it still represents 6.7% of the stock’s available float. Meanwhile, analysts are leaning bearish, with eight of the 13 in coverage carrying a “hold” or worse rating.

On the charts, HOOD seems to have found a recent floor at the $8 level, though the 140-day moving average kept a cap on today’s gains. Year-to-date, the equity is down 41.4%. 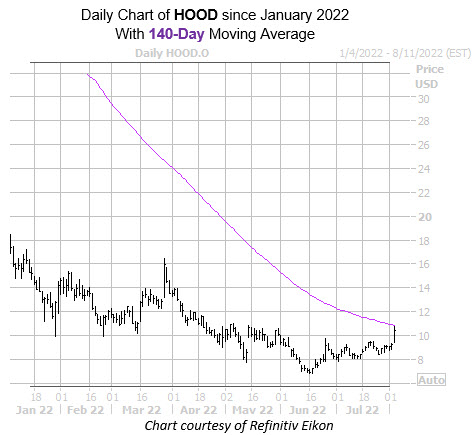