Plug Power (NASDAQ: PLUG) is a hydrogen-focused company that is based out Latham, New York. It produces a range of hydrogen-based energy solution such as fuel cell systems etc. The stock is currently down 41% from its 52-week high, but investors will be watching trading patterns closely as we head into earnings, with positive trends set to provide tailwinds to the stock. At last glance, PLUG was trading down 4% at $24.60.

Plug Power’s stock is in the news again and with the climate-bill set to increase the number of clean energy vehicles, combined with an increased investment in clean-energy related infrastructure. Investors are closely watching earnings as the stock might outperform on a better than expected result. Plug Power is expected to report anywhere from $170-$200 million in revenue for the quarter, with an earnings per share (EPS) of -.21 for the quarter.

Hydrogen power has been in the news as commercial viability has slowly started to improve. Hydrogen is seen as much cleaner alternative to electric vehicles, due to it requiring less mining and resource intensity. But, in order to make hydrogen traditional sources of energy are required which has made the industry not as viable as many would like.

Plug Power currently has a 14-day Relative Strength Index (RSI) rating of 73, which indicates that the stock is overbought. The equity also looks to be contending with the overhead 360-day moving average. If earnings are weaker than expected, expect a sharp correction, as the upbeat sentiment for the sector could easily turn bearish. 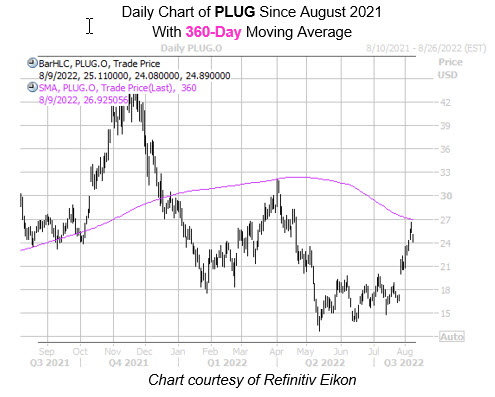