The delivery name hiked its quarterly dividend by more than 50% to $1.15 per share

The shares of FedEx Corporation (NYSE:FDX) are up 13.8% at $228.77 at last check, bucking broader market-headwinds after the delivery name hiked its quarterly dividend by more than 50% to $1.15 per share, which will be payable to stockholders on July 11. Plus, the company appointed Amy Lane and Jim Vena to its board after an agreement with investment management firm D.E. Shaw.

As a result, FDX is seeing enhanced options activity today, with 38,000 calls and 40,000 puts traded so far — four times the volume that’s typically seen at this point. Most popular is the June 230 call, followed by the 210 put in that same monthly series, with new positions being opened at both.

The security is now trading at its highest level since late March, and has also broken through overhead pressure at the 120-day moving average. The $196 level has served as a floor for the shares over the past couple of months, containing several pullbacks. Longer term however, FDX still carries a 21.8% year-over-year deficit. 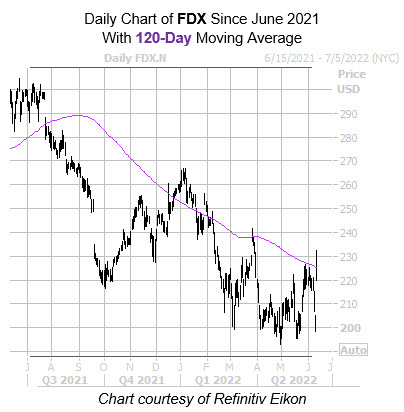 An unwinding of pessimism amongst short-term traders could fuel additional tailwinds. This is per FedEx stock’s Schaeffer’s put/call open interest ratio (SOIR) of 1.71, which stands higher than 94% of readings from the past year — indicating short-term options traders have rarely been more put-biased in the past 12 months.

Options look like a great way to weigh in on FDX’s next moves, given its Schaeffer’s Volatility Scorecard (SVS) tally of 73 out of 100 indicates the equity has consistently realized bigger returns than options traders have priced in over the last 12 months.