Today’s pop has BE set for its first close above the 140-day moving average since mid-April. And while the equity is still down 6.7% in 2022, it’s added an impressive 54.8% in the last six months, and is looking to snap a three-month losing streak, should this positive price action continue. 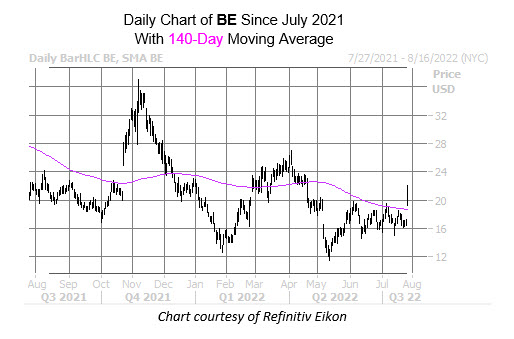 Options players are targeting Bloom Energy stock at an elevated clip in response to the news. So far, 11,000 calls and 2,830 puts have exchanged hands, which is 26 times the intraday average. The most popular position is the August 26 call, followed by the 21 call in the same series, with positions being opened at both.

This call-bias has been the norm among short-term options traders. This is per Bloom Energy stock’s Schaeffer’s put/call open interest ratio (SOIR) of 0.39, which stands higher than just 10% of readings from the past year.

Meanwhile, analysts are split on BE. Six in coverage say “strong buy,” while six say “hold.” A look at short interest shows a slight 1.4% drop in the last reporting period. Despite this, the 16.70 million shares sold short make up a solid 10.5% of the stock’s available float, and would take over six days to cover, at BE’s average daily pace of trading.