One of the “best” things for Leveraged Anchor occurred in February and March.  Up to this point, Leveraged Anchor’s success in a down market was largely theoretical.  We knew the math was right, and that the strategy had been back tested in down markets, but it had not been subject to a “real” market correction when invested.

On February 6, 2020, Leveraged Anchor rolled its short position and long hedge when SPY was at 333.72.  Shortly after this the markets started to experience some volatility.  By the end of February, SPY had dropped 12.6%, the tracking account was assigned on the short position, and the value of the Leveraged Anchor Portfolio had dropped almost 9.5% drop from its peak and dropped 5.7% on the month.

With the market dropping 12.6% from the February 6 point and 9.3% on the month, Leveraged Anchor was outperforming, but the 9.5% drop (from the peak not from the point at which it was hedged) was a bit worrisome and some concerns developed on what would happen if the market kept dropping.  Well keep dropping it did.  Over the next few weeks, the market continued to plunge.  This quick plunge led the strategy to being assigned on the short puts again on March 23, 2020.  At this point the market had dropped all the way to 222.33 – losing over 33% of its value.  Yet over this same period, Leveraged Anchor rose back up some.

In other words, from February 6, 2020, SPY dropped 33.4%.  Over this same time Leveraged Anchor only dropped 1.1%.  Leveraged Anchor was performing even better than expected.  The twin benefit of having a large volatility spike increase the value of the puts and the advantage of using a 90 delta call proved more than efficient in a large down market. A 90 delta call loses $0.90 for every $1 SPY declines.  Further, as SPY declines, the delta declines as well.  In practical terms the more dramatic the market drop, the less dramatic drop in the option.

At this point we realized that, at some point, the market would rebound – and Anchor would not.  (As the calls go up in value, the puts go down in value, we would have been lucky to “stay even” on a rebound).  However, our puts were so much in the money we could roll them down, take profit and free up cash, and keep the delta of the put above 90.  In other words, if the markets continued to go down, we would not suffer by being under hedged.

In April, when it looked like the markets were returning (SPY was already back up to 280), that is exactly what we did.  Then with that free cash, we increased our position size, which allowed the strategy to participate in some of the up market.  It of course will not be dollar for dollar, but if Anchor goes down 1% when the market goes down 33%, and then Anchor goes up 25% when the market goes up 50% (after a 33% market decline, a 50% rebound is needed to get back to break even), Anchor ends up over 20% ahead.

Of interesting note, had we rolled the puts down and increased our sizing when SPY was at 222, as opposed to 280, instead of going from 7 to 8 call contracts, we would have gone from 7 to 10, and Anchor would have finished the year another up an additional 10%.  I know of at least one member who successfully bottom ticked the market and extracted over 10% more by doing exactly that.  Knowing that that the strategy could have done better than it did is simply amazing.

With the success of the strategy, we began to think of how to improve it further, and an obvious solution presented itself – diversification.  Over the long term (and Leveraged Anchor is a long-term strategy), being diversified in different stock classes virtually always outperforms AND reduces volatility at the same time.  This led to the birth of Diversified Leveraged Anchor, also in April 2020.

The timing of the launch could not have been better.  Over the past several years, the S&P 500 had been the top, or one of the top, performing asset classes.  However, over the next months, it would slip behind others.


Members are invited to read the Leveraged Anchor Implementation to see what the expectations were when the Anchor was launched.


Above is a table showing the performance of SPY, then using 25% leverage, 50%, and 75% leverage after certain market moves over a thirty day period.  After reviewing the above, and similar tables over longer periods of time, we made a decision that utilizing 50% leverage was optimal. As you can see, the strategy performed better than expected, in both bull and bear markets. If the market declines 40% or more, the portfolio would actually be in a positive territory.

On the year, Leveraged Anchor (SPY only), was up 31.7%, while the total return of the S&P 500 was 18.4%. This is an incredible result.  However, once applying diversification, the results improved even further.  The below results are from the time the diversified strategy launched (April), not from the start of the year.  The dates listed are the actual days the trade occurred: 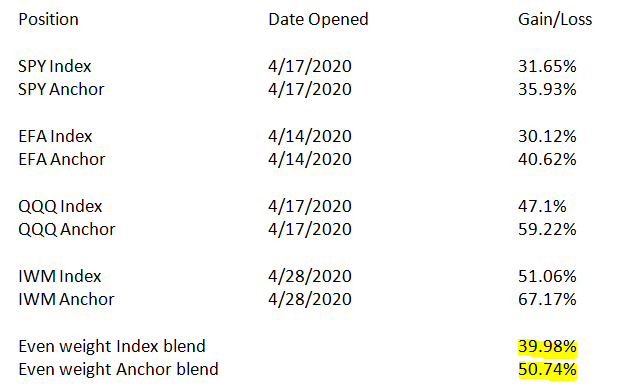 The power of diversification can quickly be seen.  If the strategy remained only in SPY, it would have returned 35.93%, under performing each of the other three indexes.  By blending performance increased almost fifteen points to 50.74%. We would expect such results in every year that the S&P 500 is not the best performing index.

In the coming days, we will be:

Rebalancing is a simple matter and must periodically be done to maintain the balance between each portion of the strategy.  However, concern must be given to potential tax consequences, changes in leverage, and, as fractional options are not available, what the possible rebalancing results look like.

Similarly, rolling the long calls to increase the position size (leverage), must be weighed against tax concerns.  It makes little sense to increase leverage by a few percentage points if there will be significant tax implications that can be avoid by waiting a few months.

One of the questions we are often asked is “under what circumstances would you expect to lose money on the account?” We covered this in the The Downside Of Anchor article.

Another question is “How do newcomers “catch up” so everyone is playin the same game?” The members forum has a dedicated topic with detailed instructions of how to start a new portfolio.

While I know 2020 has been a tough, even tragic, year for many people, it certainly has not been for Anchor, and it is our hope that a growing portfolio using this strategy has at least somewhat helped. The strategy not only outperformed the markets, it also allowed our members to sleep well at night and not worry about market timing.

As always, if there are questions or suggestions, please do not hesitate to post them.  Anchor has had an incredible decade of evolution to get to this point, and I we are always open to improving it in other ways if it can be done.

Christopher Welsh is a licensed investment advisor in the State of Texas and is the president of an investment firm, Lorintine Capital, LP which is a general partner of three separate private funds. He is also an attorney practicing in Dallas, Texas. Chris has been practicing since 2006 and is a CERTIFIED FINANCIAL PLANNER™. Working with a CFP® professional represents the highest standard of financial planning advice. He offers investment advice to his clients, both in the law practice and outside of it. Chris has a Bachelor of Science in Economics, a Bachelor of Science in Computer Science from Texas A&M University, and a law degree from Southern Methodist University. Chris manages the Anchor Trades portfolio and oversees Lorintine Capital’s