When markets are closed Monday, that bodes well for next week

If you’re looking to put on some positions before the 4th of July, my article this week may inspire some ideas. I’m looking at how stocks in general have performed in the past during the upcoming holiday week. Also, we’ll find out if there’s anything interesting in the individual days leading up to and immediately after the 4th. Finally, I list the best and worst stocks during the holiday week.

Looking at the last 50 July 4th holidays takes us back to 1972. Using S&P 500 Index (SPX) data since then, I found how stocks have performed during the holiday week compared to other weeks. Stocks have historically done well for the week of July 4th. The index averages a gain of 0.39%, which is more than twice the average return of other weeks. Exactly 62% of holiday weeks have been positive compared to 57% of other weeks. Not surprisingly, the 4th of July week has significantly less volatility than other weeks as measured by the standard deviation of returns. According to this, we can expect a boring but possibly positive week next week. 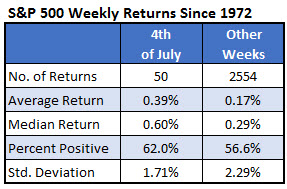 This year, the 4th of July lands on a Monday. I wondered if the day of the week that traders were off mattered. The table below breaks down the last 50 July 4th holiday weeks depending on which day traders were off. I don’t really have a theory on why it would matter, but the table below shows the numbers. The good news is that when Monday is the day off the S&P 500 has performed the best, averaging a 0.70% gain for the week and positive over 70% of the time. Stocks performed the worst by average returns when the day off was in the middle of the week. 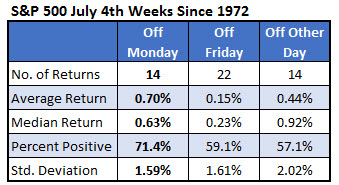 Despite the historically bullish returns when Monday was the day off during July 4th week, you might want to wait until Tuesday before putting on any positions. The table below breaks down the holiday week by day when Tuesday is the first trading day of the week. In these cases, Tuesday has been positive less than 30% of the time averaging a loss of 0.17%. The next three days of the week made up for the slow start with Friday being the best day for stocks averaging a gain of 0.43%.

The table below shows the best performing S&P 500 stocks over the past ten years. Software companies seem to perform well during week, as well as some of the biggest tech stocks Netflix (NFLX), Apple (AAPL), and Alphabet (GOOGL). 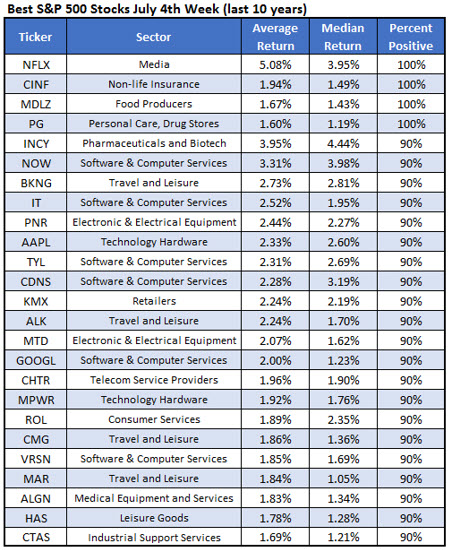 Finally, the table below is a list of the worst stocks during July 4th week over the past ten years. Oil stocks, which have been the best performing stocks so far in 2022, dominate the list. If you expect oil to reverse at some point, this coming week could be the time it happens. 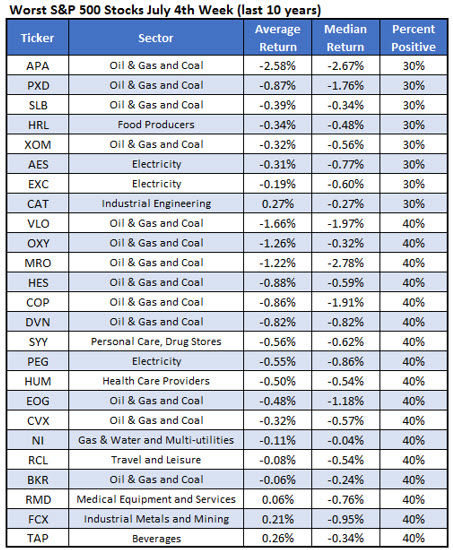