Seasonality is on the tech giant’s side

Tech giant Apple Inc (NASDAQ:AAPL) was flying high last month, The company just shared an impressive fiscal third-quarter earnings turnout, and its stock logged an 18.9% win in July, marking its best month since August 2020. While AAPL is cooling off from July’s red-hot price action, last seen down 0.4% at $160.87, the stock has seasonality on its side, and could continue to climb well into August.

To be more specific, Apple stock just showed up on Schaeffer’s Senior Quantitative Analyst Rocky White’s list of the 25 S&P 500 (SPX) stocks with the best August returns, going back 10 years. According to this data, AAPL saw positive one-month returns 80% of the time, and averaged 7.2% jump during this time period. A similar move from its current perch could put the equity just below the $173 level — a region AAPL hasn’t touched since early April. 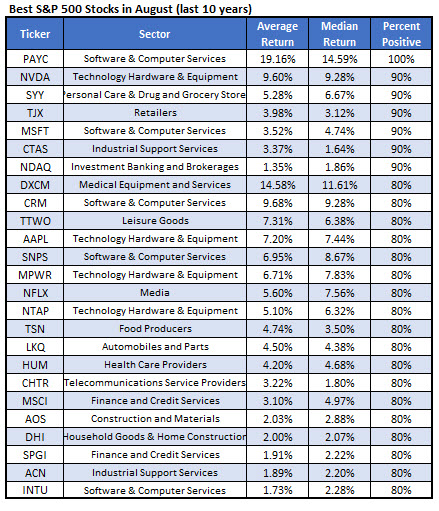 A closer look at the stock’s technical setup shows several potential layers of support emerging. Specifically, the 160-day moving average and $159 region could act as a possible floor for the equity since it broke above both after its earnings report. Year-to-date, AAPL still suffers a 9.3% deficit. However, it’s managed to rise 10.7% in the past 12 months. 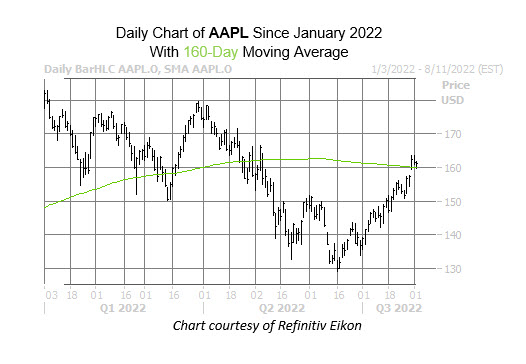 An unwinding of pessimism among options traders could help push the Big Tech bellwether even higher. At the International Securities Exchange (ISE), Cboe Options Exchange (CBOE), and NASDAQ OMX PHLX (PHLX), the stock sports a 10-day put/call volume ratio of 1.04, which stands higher than 95% of readings from the past year. In other words, these players have been picking up puts at a much quicker-than-usual clip.

The equity’s Schaeffer’s put/call open interest ratio (SOIR) of 1.38 echoes this, as it sits higher than all other annual readings. This means short-term options traders are at their most put-biased in a year.