The equity is slipping ahead of the report

As the general tech sector takes a tumble, the shares of Cyberark Software Ltd (NASDAQ:CYBR) are going along with it, just ahead of the cyber-security concern’s second-quarter earnings report, which is due out before the open tomorrow, Aug. 10. The equity was last seen down 2.6% at $134.15.

It’s been a rocky couple of months for the security, which has been consolidating below the $146 level since its rally off its annual low of $100.35 in May. Several trendlines have also emerged as a ceiling for the shares, including the 120-day moving average. Year-to-date, the tech stock has shed 22.4%, though it’s added more than 15% in the past three months. 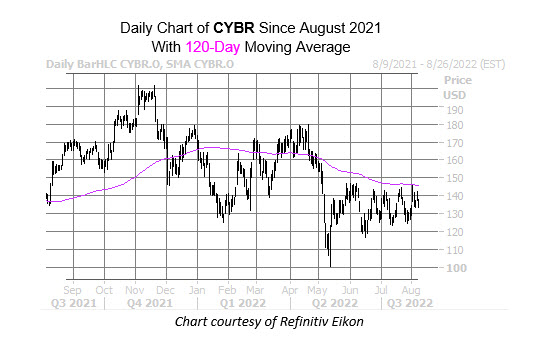 Cyberark’s typically quiet options pits are getting a kick start ahead of its earnings event. Though still relatively muted, 299 calls have exchanged hands, which is four times the intraday average. The two most popular positions are the August 12- and 155 calls, with positions being bought to open at the later.

This shift toward calls in unusual, as options players have been much more put heavy than usual in recent weeks. This is per CYBR’s 10-day put/call open interest ratio of 1.28, which sits higher than 81% of readings from the past year.

Speaking of options, these traders are pricing in an outsized post-earnings swing of 13.4% for the security, which is much bigger than the 8% next day move CYBR has averaged during its past eight reports, regardless of direction. A closer look at the past two years shows five of its eight next-day returns coming in positive, including a 12.3% pop after its May report.

Analysts, meanwhile, are incredibly bullish. Of the 16 in coverage, 14 say “strong buy,” without a single “sell” on the books. Plus, the 12-month consensus price target of