Though it’s seen a sharp pullback from its early April record highs near the $610 region, retail concern Costco Wholesale Corporation (NASDAQ:COST) has held fast to a nearly 21% year-over-year lead — quite impressive considering the tumble the broader market has taken this quarter. More recently, COST staged a bounce off the $406 mark, and quickly broke past pressure at the 30-day moving average, which now sits just below as potential support. And while the $490 area now looms as potential resistance, there’s reason to believe Costco stock could be a noted outperformer in July, and potentially break north of here by the end of the month. 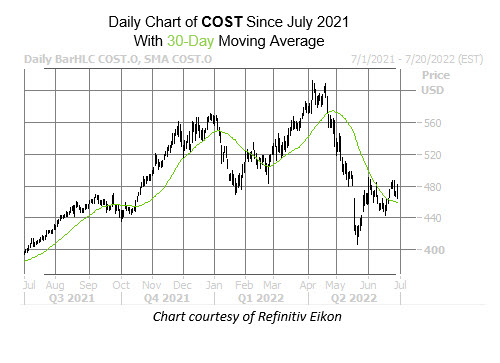 This is because the equity just landed on Schaeffer’s Senior Quantitative Analyst Rocky White’s list of the best performing stocks on the S&P 500 in July going back 10 years. According to this data, COST has staged positive returns during the month 90% of the time, averaging a gain of 4.6%. A similar move from its current perch would put the security right near the $503 level, which hasn’t been touched since mid-May. What’s more, Costco stock is just one of two retailers to show up on the list, next to Target (TGT), which has averaged a 4.6% monthly return.

Despite the relative outperformance, several analysts analysts remain hesitant , and this could leave the door wide open for more bull notes. Of the 18 in coverage, five consider the stock a “hold.”

An unwinding of pessimism among options traders could also put wind at the stock’s back. At the International Securities Exchange (ISE), Cboe Options Exchange (CBOE), and NASDAQ OMX PHLX (PHLX), the stock sports a 10-day put/call volume ratio of 1.11, which sits higher than 84% of readings from the past year. In other words, puts are getting picked up at a quicker-than-usual clip.

Short-term options traders have also been unusually put-biased. This is per COST’s Schaeffer’s put/call open interest ratio (SOIR) of 1.32, which stands in the 76th percentile of its 12-month range.