Continental Resources, Inc. (NYSE:CLR) is down 0.9% at $64.63 at last check, but it looks as though this pullback may be short-lived. Up 45.3% year-over-year, the security just reached a June 14, roughly eight-year high of $75.45, after a $25.41 billion buyout offer from founder Harold Hamm. Its latest pullback has placed shares near a trendline with historically bullish implications, though, which may soon push CLR back up the charts, and over a technical level of resistance.

According to Schaeffer’s Senior Quantitative Analyst Rocky White’s latest study, CLR is now within one standard deviation of its 80-day moving average. The security has seen two similar signals over the last three years, and was higher one month later each time, averaging a 5% gain for that period. A comparable move from its current perch would place it over the $67 level — an area that has been pressuring the shares lower for nearly two weeks. 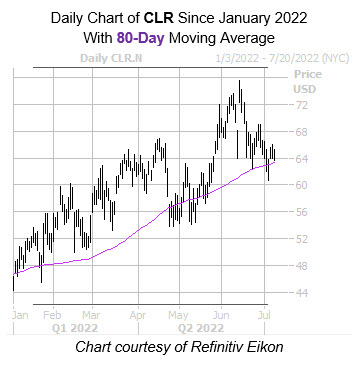 There is plenty of room for analysts to turn bullish on Continental Resources stock. Of the 16 firms in question, 12 carry a tepid “hold” or worse rating. The equity looks ripe for a short squeeze, too, given the 6.28 million shares sold short make up a massive 39.9% of the security’s available float, which is more than three days’ worth of pent-up buying power.

A sentiment shift in the options pits could benefit the security, too. This per CLR’s Schaeffer’s put/call open interest ratio (SOIR) of 1.55, which sits higher than all annual readings. In other words, short-term options traders have never been more put-biased.