Blue-chip concern IBM (NYSE:IBM) is up 0.9% at $138.39 this afternoon, brushing off a price-target cut from BofA Global Research to $163 from $165. Today’s bear note comes just ahead of the tech name’s second-quarter earnings report, which is due out after the close on Monday, July 18. Ahead of next week’s event, let’s take a look at IBM’s recent chart performance, and how the equity has usually fared the day after its earnings call.

Despite a volatile year so far, IBM stock is fresh off a June 6, roughly one-year high of $144.73. The equity has had support at its 80-day moving average since late May, with the trendline today capturing a pullback to the $135 level. While a ceiling appears to be emerging at the $142 area, IBM has managed to stay above its year-to-date breakeven. 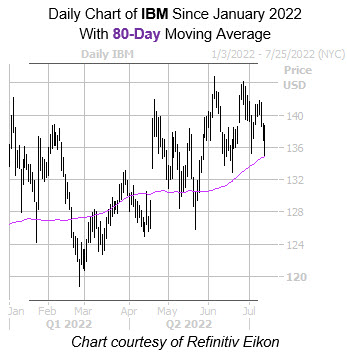 The security has a mixed history of post-earnings returns, finishing four of eight next-day sessions higher, including a 7.1% pop in April. Shares averaged a move of 5.5% over the past two years, regardless of direction, but this time around the options pits pricing in a bigger swing of 7%.

Options traders are pessimistic, according to the IBM’s 10-day put/call volume ratio of 1.26 at the International Securities Exchange (ISE), Cboe Options Exchange (CBOE), and NASDAQ OMX PHLX (PHLX), which ranks higher than 93% of readings from the past year. This means puts have been getting picked up at a much faster-than-usual pace.