The shares American Eagle Outfitters Inc (NYSE:AEO) have had a rough go of it this year. The security has shed 61.2% in the past 12 months, with a recent consolidation level emerging at the $13 mark. And while AEO is up slightly today, last seen at $12.85, with a more than 9% month-over-month lead under its belt, a historically bearish signal indicates that this could be a false start for the retail name.

This is because AEO just came within one standard deviation of its 80-day moving average after a lengthy period below the trendline. Per data from Schaeffer’s Senior Quantitative Analyst Rocky White, there have been five similar instances in the past three years. After 80% of these occurrences, the stock was lower, averaging a one-month drop of 10%. A similar move from its current perch would put AEO back below the $12 mark, and closer to its almost two-year low of $10.82 from late July. 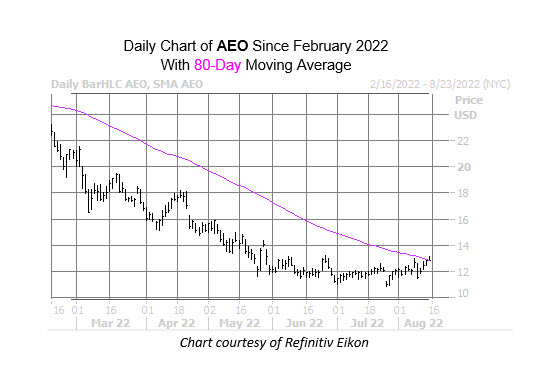 While the majority of analysts are lukewarm on American Eagle stock, it still looks susceptible to downgrades. Of the 12 in coverage, three still call the security a “strong buy.”

A shift in sentiment among options traders could also put pressure on the security. At the  International Securities Exchange (ISE), Cboe Options Exchange (CBOE), and NASDAQ OMX PHLX (PHLX), AEO sports a 10-day call/put volume ratio of 3.2, which stands higher than 75% of readings from the past 12 months. In other words, calls are being picked up at a quicker-than-usual clip of late.