Tesla Inc (NASDAQ:TSLA) took a trip to the earnings confessional after yesterday’s close, and was last seen up 7.3% at $796.76 following the results. The company reported second-quarter earnings that beat analysts’ estimates, while revenue fell just shy of forecasts due to higher costs and supply chain issues.

On the analyst front, no fewer than five analysts issued hefty price-target hikes after the news, while Berenberg lowered its price objective to $850 from $900 as it awaits a more intriguing entry point. Meanwhile, the 12-month consensus price target of $889.87 is a 12.4% premium to Tesla stock’s current perch, and 14 of 23 in coverage rate the security a “buy” or better.

Options players are chiming in as well, and the 593,000 calls and 508,000 puts that have crossed the tape so far today account for nearly double the intraday average. The weekly 7/22 800-strike call is seeing the most action, followed by the 450-strike put from the same series, with positions being opened at both.

From a technical standpoint, Tesla stock continues to struggle on the charts, though today’s pop puts it on track to close above its 60-day moving average for the first time since May 4. In addition, the equity just moved above the $760 level, which has stifled rally attempts multiple times since early June. Still, year-to-date TSLA sports a 24.6% deficit. 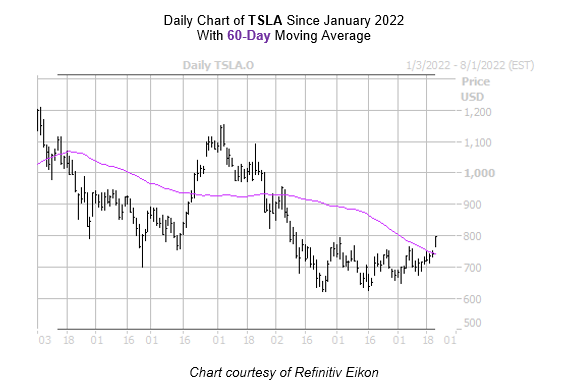