American Airlines Group Inc (NASDAQ:AAL) is up 1.3% to trade at $14.66 at last check, ahead of the company’s second-quarter earnings call, which is due out before the open on Thursday, July 21. Today’s pop came after Bank of America (BofA) CEO Brian Moynihan said consumers continue to spend on travel at a solid pace, as they prioritize experiences over shopping.

The equity earlier surged to its highest level in more than one month, though overhead pressure at the 50-day moving average kept a cap on the rally. The shares have been bouncing off a June 17, one-year low of $11.93, though longer term the security is still down 25.9% year-over-year. 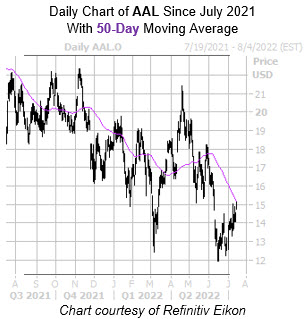 American Airlines stock has a mostly positive history of post-earnings returns, finishing five of eight next-day sessions higher, including a 9.3% pop back in January 2021. The shares averaged a move of 3.8% over the past two years, regardless of direction, but this time around the options pits pricing in a much bigger swing of 10.9%.

The brokerage bunch is bearish towards American Airlines stock, with 13 of the 14 analysts in question carrying a tepid “hold” or worse, meaning there’s plenty of room for upgrades going forward. Meanwhile, shorts are running for the exits, with short interest down 7.9% in the last reporting period. The 82.82 million shares sold short still account for 12.9% of the equity’s available float, though, indicating it could benefit from a short squeeze.

An unwinding of pessimism in the options pits would fuel additional tailwinds. This is per AAL’s Schaeffer’s put/call open interest ratio (SOIR) of 1.77, which ranks in the elevated 88th percentile of annual readings.