GOOGL is a historical outperformer in July

Inflation and recession speculation has gripped Wall Street for much of 2022, and the broader market’s selloff has undeniably underscored investors’ fears. The S&P 500 (SPX) has been no stranger to the volatility, sitting roughly 20% lower year-to-date and on track for its worst first half of the year performance in more than five decades. This tumultuous environment has weighed on some of the index’s most prominent members — FAANG stocks. Each member of the Big Tech collective sports double-digit losses at the year’s halfway point. However, one in the bunch looks poised for a temporary respite: Alphabet Inc (NASDAQ:GOOGL).

Digging deeper, seasonality suggests the shares of Google’s parent company could jump next month, per data from Schaeffer’s Senior Quantitative Analyst Rocky White. Alphabet stock just landed on White’s list of the best performing stocks on the SPX in July, going back 10 years. In fact, the security saw positive monthly returns during this time period nine out of ten times, boasting an 8.9% pop on average, edging out Apple (AAPL) as the best FAANG stock to own next month. 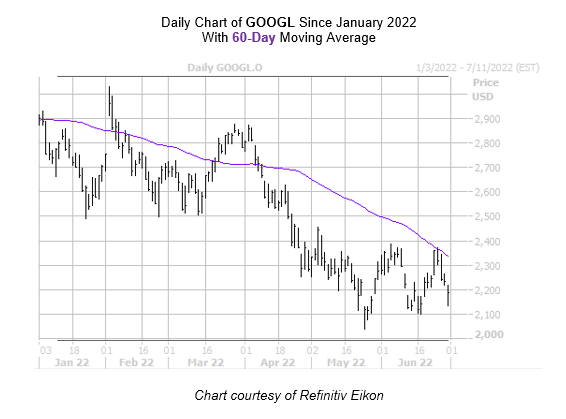 An unwinding of pessimism in the options pits could help put some wind at the security’s back. This is due to the fact that Alphabet stock’s 50-day put/call volume ratio at the  International Securities Exchange (ISE), Cboe Options Exchange (CBOE), and NASDAQ OMX PHLX (PHLX) stands higher than 94% of readings from the past 12 months — indicating a clear preference for bearish bets.