Google parent Alphabet Inc (NASDAQ:GOOGL) was last seen 7% higher at $112.38, brushing off top- and bottom-line misses for the second quarter. The FAANG giant reported earnings of $1.21 per share on revenue of $69.69 billion, both of which fell short of expectations, as well as weaker-than-expected YouTube advertising and Google Cloud revenue. However, thanks to strong Google ads sales that, in conjunction with Microsoft’s (MSFT) upbeat outlook, megacap tech stocks are propping up the broader market today.

No less than 12 analysts lowered their price targets in response, though Morgan Stanley bucked the broader sentiment and issued a price-target hike to $145 from $140. Options traders are having their say as well, with the 293,000 calls and 226,000 puts already exchanged today amounting to triple the intraday average volume. Most popular by far is the weekly 7/29 110-strike call, where new positions are being opened.

A broader look shows a penchant for bullish bets. In the last 50 days 1.67 calls have been bought for every put on the International Securities Exchange (ISE), Cboe Options Exchange (CBOE), and NASDAQ OMX PHLX (PHLX). This ratio sits in the slightly elevated 74th percentile of its annual range, suggesting a much healthier appetite for Alphabet stock calls of late.

Even with today’s bull gap, GOOGL has shed nearly 22.5% in 2022, with the 80-day moving average containing any major breakouts. The equity staged a nice bounce off its May 24 annual low of $101.85, but the $120 level rejected more recent rallies in the following months. 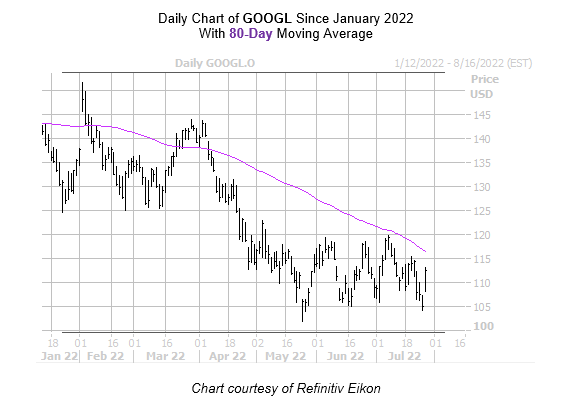