A historically bearish signal is flashing for Digital Reality Trust

In August, we warned against investing in real estate investment trusts (REITs) in the coming month, based on miserable seasonality trends and a slew of other factors. One of the names that we highlighted was Digital Reality Trust Inc (NYSE:DLR).

Our prediction, for DLR specifically, wound up being spot on, as the equity began its plummet toward its Oct. 13, six-year low of $85.76 in the middle of the month and wound up losing almost 20% in September — marking its worst month on record.

Since this low, however, DLR has enjoyed a notable rebound. The security is set to string together it’s second-straight monthly win, and gapped above recent pressure at the $102 mark in mid-November. This could be the extent of the rally, however, as the REIT loses steam near the 80-day moving average.

In fact, this trendline has had historically bearish implications in the past, according to a study from Schaeffer’s Quantitative Analyst Rocky White. This data shows that DLR has seen five similar occurrences during the last three years. One month later, the security was lower 80% of the time, averaging a 2.5% drop. A similar move from its current perch would put Digital Reality Trust stock at $105.80. 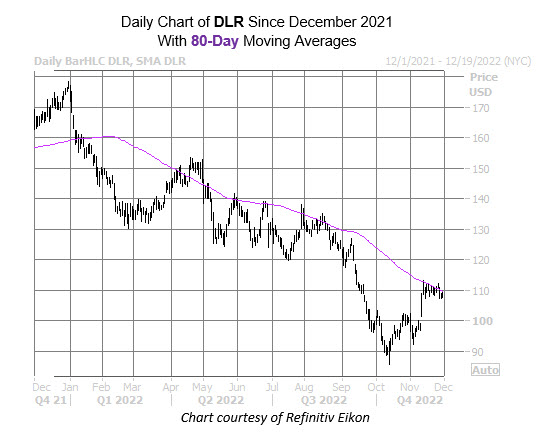