It looks like a single trader just sold to open 1,700 put contracts

Papa John’s Int’l, Inc. (NASDAQ:PZZA) is on the rise today, up 2.7% at $82.91 at last check as shares buck the broad-market pullback. While the catalyst behind the increase in activity on the pizza stock is unclear, options are still running wild. So far, 2,014 of these contracts have been exchanged, which is seven times the intraday average, compared to just 84 calls. The most popular position by far is the December 70 put, where positions are being sold to open. An even deeper dive attributes this activity to a single trader, who sold 1,7000 contracts at a volume weighted average price (VWAP) of 65 cents per share.

This trade suggests this investor expects PZZA to hold above the $70 region until these contracts expire on Friday, Dec. 16. The equity looks to have found support high above here at the $80 mark in recent weeks, following a pullback from its 200-day moving average. Papa John’s stock has managed to keep a fair bit of distance between its current perch and its early October two-year low $66.74, though it still suffers a 38.1% year-to-date deficit. 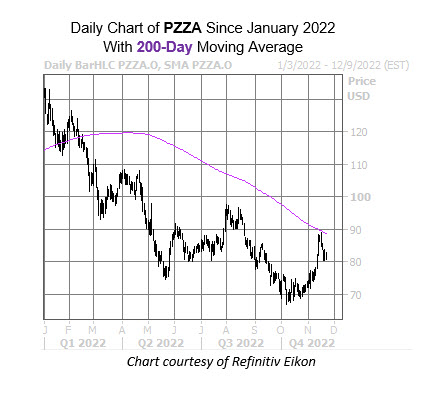 Earlier this month, Papa John’s posted a third-quarter earnings and revenue miss, and a deluge of bear notes quickly followed. No less than seven analysts slashed their price targets after the report. Still, the 12-month consensus price target sits at $94.60 — a 14.3% premium to current levels. Plus, 12 of the 17 analysts in coverage call the security a “buy” or better, compared to just five “hold” ratings.

Circling back to options activity, it looks like puts have rarely been more poplar. At the International Securities Exchange (ISE), Cboe Options Exchange (CBOE), and NASDAQ OMX PHLX (PHLX), 1.70 PZZA puts have been picked up for every call during the past 10 weeks. This ratio sits higher than 95% of readings from the past 12 months.

Echoing this, the equity’s Schaeffer’s put/call open interest ratio (SOIR) of 6.77 stands higher than all other readings from the past 12 years. In other words, short-term options traders are incredibly put-biased right now.