Subscribers to our Schaeffer’s Expiration Week Countdown Bulletin service scored a 113% profit with our recommended Rivian Automotive Inc (NASDAQ:RIVN) December 16, 2022 29-strike put. Below, we’ll dive into our bullish stance on RIVN and how the trade played out so quickly.

At the time of our recommendation on Friday, Dec. 9, we highlighted a small bear flag that was forming under Rivian Automotive stock’s support/resistance level. That level also coincided with the $29-$30 pivot that rejected a retest on the same day of our recommendation, while a the equity’s short-term moving averages were rolling over and threatening to act as resistance. 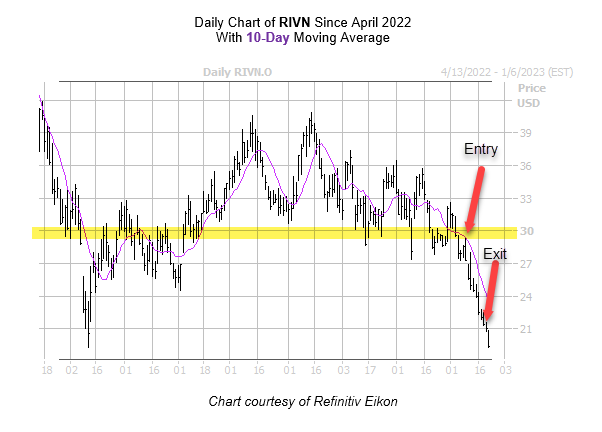 What’s more, shares of the electric vehicle (EV) maker were rejected at the December peak call level, and a breakdown through the 27.50-strike was predicted to flush the stock’s price to the 25- or even 22.50-strike, as it moved to break down through the peak put area.

We also noted that an unwinding of options traders optimism could send the shares lower. At the time of our recommendation, RIVN sported a 10-day call/put volume ratio of 2.49 at the International Securities Exchange (ISE), Cboe Options Exchange (CBOE), and NASDAQ OMX PHLX (PHLX), which ranked in the 94th percentile of annual readings.

That shift was realized, as RIVN’s 10-day call/put volume ratio now sits at 1.32, which is higher than just 58% of reading from the past 12 months.

Rivian Automotive stock is pulling back today alongside the broader market and was last seen down 8.6% at $19.22, putting it on track for its 10th-straight daily loss. These losses accelerated after the company paused plans in Europe with Mercedes-Benz. Short sellers are cashing in on the crash, after a plethora of hedge funds bet against megacap growth stock like Tesla (TSLA), Amazon.com (AMZN), and Meta Platforms (META). Year-to-date, RIVN is down 81.7%.