But if you ask me, the primary problem is having a sound trading strategy. Many new traders try to skirt by on superficial strategies like “sell options for income,” or something similar and they simply aren’t trading with an edge.

So in this article we’re going to go through some simple and easy-to-understand trading strategies that traders with a small account can quickly start applying.


While the emphasis is on simplicity, all of these have sound logical, and in some cases, academic rigor.


What you’ll find when reading through these strategies is most of them utilize vertical spreads as the tool of choice. Vertical spreads are most options traders’ bread and butter. Get acquainted with them.

The post-earnings announcement drift is a stock market anomaly, it’s the tendency for a stock to trend in the direction of its earnings surprise for 6-9 months following the report.


Even after several decades of this edge being widely known and well-disseminated in academic literature and books, the anomaly persists. The reason why isn’t as important as the fact that it’s robust enough to build a trading strategy on, and unlikely to disappear in a few months or years time.


There’s also a well-known tendency for implied volatility to rise in the days and week’s leading to an earnings release, allowing the astute trader to simply buy options before the options, on average, begin to rise in IV.


Euan Sinclair proposed a number of trade structures for exploiting this tendency in his book Positional Options Trading, so take a look at Chapter 5 for more information.

A hedge fund hotel is a derogatory phrase for a stock of which most of the public float is owned by hedge funds who are copying each other or are part of a hivemind.


These stocks can look reasonably liquid at a glance, but if one of those funds wants to sell their position, look out below, because the only buyers big enough to absorb it are hedge funds who are already long up to their eyes.


As such, a fund needing to liquidate their position to raise cash will often cause a huge one-day drop in the stock, only for it to recover in the ensuing days.


While this isn’t anywhere as robust as something like a PEAD strategy, which you can run throughout earnings season, this is a trade you might see a few times a quarter.


I’m pretty sure there’s a number of sites that will give you a list of the biggest hedge fund hotels like this Yahoo Finance watchlist, but a lot of the best ideas are found by just scanning 13Fs and looking for the same smaller names. Repeat offenders are names from the Liberty family, which are consistently hedge fund hotels.


Anyhow, from time to time one of these will crater 10+% in one day, perhaps over a few days. You’ll need to be checking for news or filings on a stock and ensure nothing has changed. It’s always good to do a cashtag search on Twitter as well, as certain people on Fintwit are so ingrained in certain stocks that they can almost tell you the news before it hits the tape.


Once you have the all-clear that the current price move seems to be purely supply/demand driven, and unlikely to related to a change in the fundamental value of the stock, only then can you consider putting on a position.


A textbook example of this type of catalyst occurred during the GameStop-driven short squeeze mania in January 2021. For instance, see the chart of Universal Insurance Holdings (NYSE: UVE) compared to the chart of GameStop (NYSE: GME) during its squeeze :

Because UVE’s decline and recovery was negatively correlated with GME’s volatility, it’s likely, in hindsight, that some hedge fund that got short GME or one of another handful of names that squeezed back then needed to raise cash and sold their UVE, pushing the price down for a few days.


It’s always easy in hindsight, but in the moment, the picture is seldom as clear as I painted the above example. Nothing in trading is.

The idea of merger arbitrage is simple. A big company bids $10.00/share to buy a smaller company, currently trading at $7.00. The smaller company’s share price shoots up to, say, $9.80 as the news comes out.


Merger arbitrage traders or ‘arbs’ will then buy the target’s stock for the ~2% discount to the deal price and short the acquirer’s stock against it. They lock in a pretty good annualized profit should the deal go through without a hitch.


Some variation of this scenario repeats itself across several deals.


That’s fine, but under normal circumstances, merger arb is a yield provider, nothing too exciting for short-term traders, especially those looking to build a small account.


Sometimes, though, the market does not like a deal. Maybe the acquirer has a bad reputation, or perhaps regulators are making noise and the price of the target company suffers as a result. These are the situations that might interest a short-term trader.


And the gold standard of this type of trade just occurred back in October, the Elon Musk and Twitter (formerly NYSE: TWTR) deal.

One look at the price chart of Twitter is all you need to tell that this was a situation with fat margins for traders if it went through: 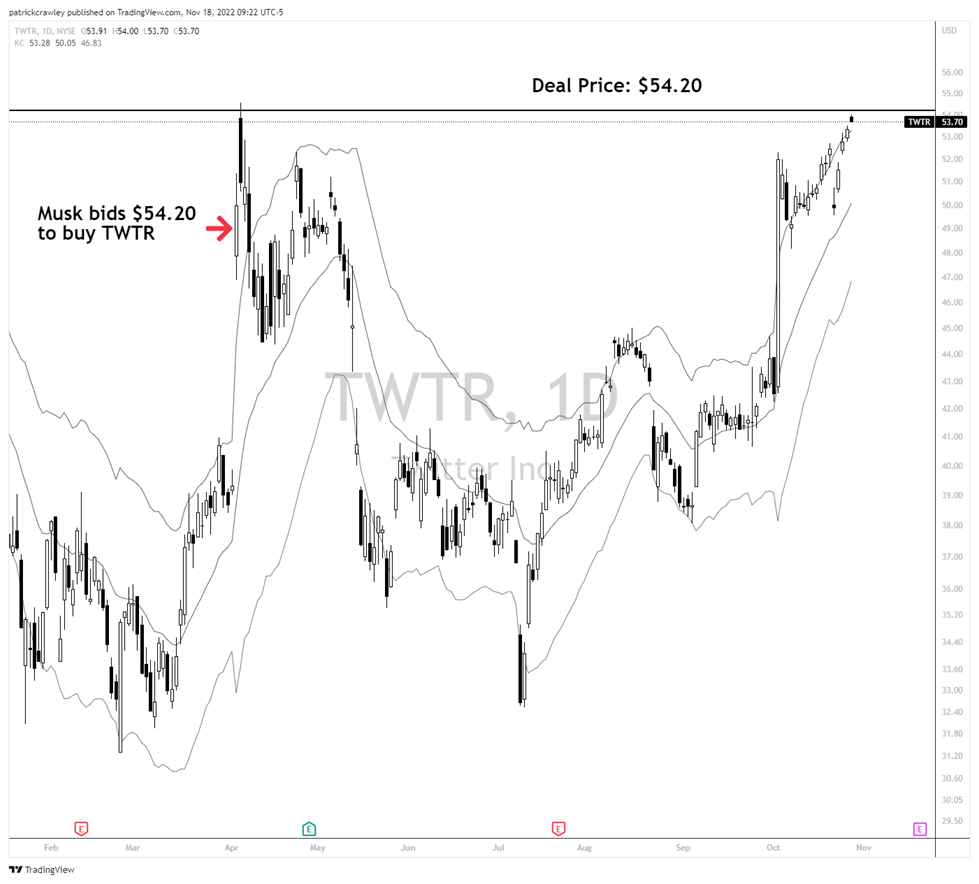 As you can see, the market didn’t like this deal. Elon Musk wanted out of the deal from pretty early on and was doing his best to kill the deal. And while some analysis and handicapping were required, if you ask M&A analysts, the eventual outcome was clear as day pretty early on.

But even if you knew nothing about the deal, this is the type of situation where implied volatility is typically quite low, as there’s a tighter range of prices due to the deal overhang. This could allow you to outright buy calls quite cheaply.

Essentially, the market was giving you better than 4-to-1 odds that the deal would close within six months.

It’s important to note that the Twitter deal was a home run for M&A traders. Deals like it don’t come by everyday, but there are deals with significant regulatory or shareholder approval hurdles that will sometimes, momentarily, offer you very favorable bets to simply buy options without fussing with more complex trade structures.

This article outlines three potential edges for small account traders to research and adopt aspects of:

The first strategy is repeatable, and provides plenty of opportunities each earnings season. The second and third strategies are less consistent and opportunities come up in clusters.

For this reason, it’s always good to have a mix of different strategies to implement, as the opportunities offered by strategies varies with time. Focusing too much energy on one might leave you with a strategy that isn’t bearing any fruit.