MicroStrategy is the largest corporate buyer of Bitcoin

Software name MicroStrategy Incorporated (NASDAQ:MSTR) is fractionally higher this afternoon, last seen up 0.1% at $136.76, after earlier hitting a more than two-year low of $132.56. The largest corporate buyer of Bitcoin (BTC), MSTR and other crypto-adjacent stocks have faced headwinds this year, as the industry struggles to combat bankruptcies, bleak sentiment, and increasing regulatory scrutiny.

It’s been particularly rough for MSTR, though, which has shed 75% year-to-date versus BTC’s 64.3% loss over the same timeframe. After recovering from a May rut that pushed shares close to the $134 level, the security saw multiple rallies cut short by its 170-day moving average. 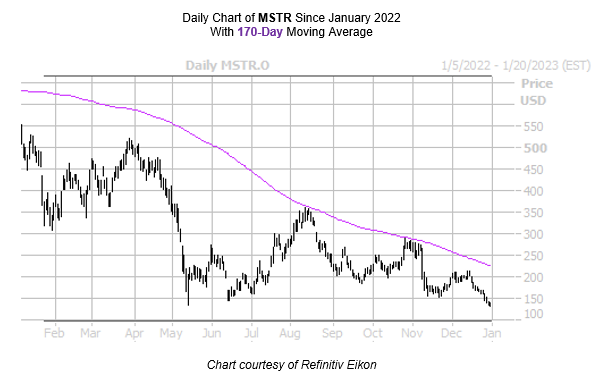 Sentiment surrounding MSTR has been bearish. In fact, 1.93 puts have been picked up for every call at the International Securities Exchange (ISE), Cboe Options Exchange (CBOE), and NASDAQ OMX PHLX (PHLX) during the past 10 weeks. This ratio sits higher than 75% of readings from the past 12 months, indicating a much healthier-than-usual appetite for long puts of late.

MicroStrategy stock’s 12-month consensus target price of $477.33 is a staggering 247.6% premium to current levels, meaning there’s ample room for price-target cuts to roll in. This unwinding of optimism could be underway already, as Jefferies yesterday cut its price target to $110 from $140.