Subscribers to our Schaeffer’s Weekend Trader Alert service scored a 100% profit with our recommended Goldman Sachs Group Inc (NYSE:GS) January 20, 2023 340-strike call in just over one week. Below, we will dive into why we suggested that call in the first place, and how the trade played out so quickly.

At the time of our recommendation on Sunday, Oct. 30, we noted how the security had staged multiple pullbacks to its ascending 36-month moving average and its 2018 peak. The shares had also pushed above the 252-day trendline, which acted as resistance in September. 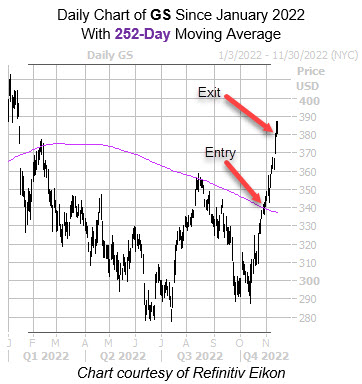 What’s more, Goldman Sachs stock was fresh off a positive post-earnings reaction, and closed above a trendline connecting lower highs since Nov. 21. Short interest had surged to its highest level in over two years in mid-August, too, and shorts seemed to be in the early stages of covering.

The equity continued to rally — up 13% since our recommendation — and is now eyeing its sixth gain in the last seven sessions. Last seen up 0.2% at $386.24, shares are also now trading at their highest level since January. Shares have also added 31.8% so far this quarter, and conquered its year-to-date breakeven level.