Get Your Free Oil Forecast

Brent crude oil remains under pressure despite trading marginally higher this Friday. Crude oil fundamentals including both API and EIA weekly crude inventory numbers showing bigger declines than expected have not been enough to overcome global recessionary fears. In addition, the Keystone pipeline in the U.S. has been shut down due to the largest crude oil spills in roughly ten years. Crude oil’s pushback today is largely attributed to this hit to supply however, the worsening COVID situation in China is hampering hopes for a positive China re-open whereby demand for crude should theoretically increase. The EU’s G7 price cap on Russian oil is yet another uncertainty in the crude oil equation with Russia not showing signs of clarity around their response function just yet. While they have stated that they will not accept the price cap, supply cuts have not yet been actioned which could give crude a boost.

This leaves the global slowdown rhetoric at the forefront of price limitations for crude oil and with further interest rate hikes scheduled for next week, the impact on consumer demand and economic growth will be negatively affected.

From a USD perspective, PPI and Michigan consumer sentiment will be key ahead of next week’s Federal Reserve interest rate decision because of the recent FOMC blackout period whereby Fed officials are unable to provide input. As of now, the Fed is being divided into dovish and hawkish camps, with doves receiving support from softening inflation while hawks more recently garnered provisions from a tight labor market (NFP beat) and more recently the ISM services print. The depressed greenback may be looking to turnaround post FOMC which could weigh on crude oil despite December being an historically weaker month for the dollar. 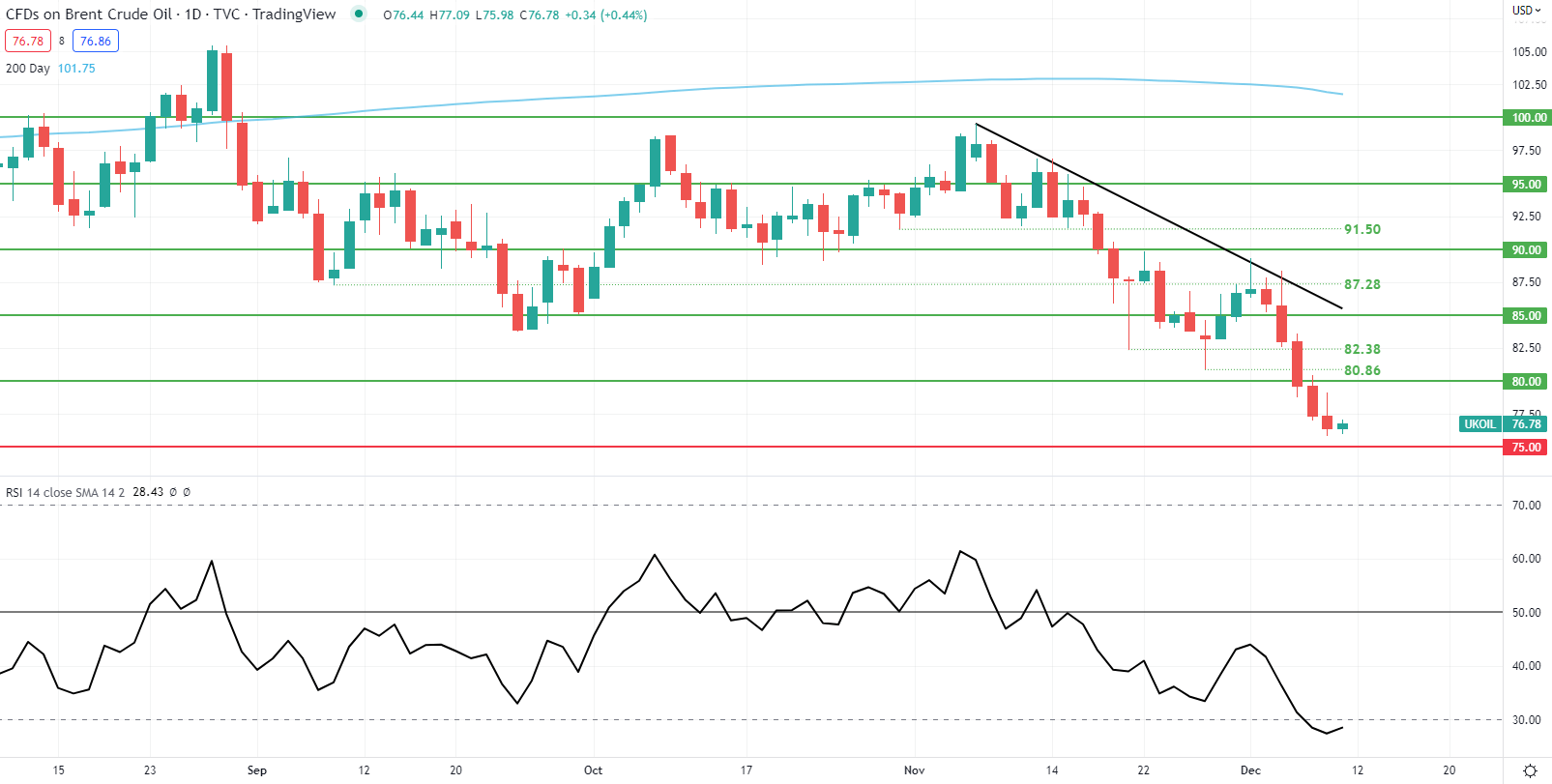 Daily Brent crude price action shows the 75.00 psychological support handle coming under pressure however, the Relative Strength Index (RSI) may suggest slowing bearish momentum with the RSI currently in oversold territory. This could give bulls some hope particularly if U.S. economic data misses forecasts giving crude oil a boost from the weaker greenback.

IGCS shows retail traders are NET LONG on crude oil, with 86% of traders currently holding long positions (as of this writing). At DailyFX we typically take a contrarian view to crowd sentiment but resulting in a short-term downside bias.