Aurinia Pharmaceuticals stock is gapping out of penny stock territory

The shares of Aurinia Pharmaceuticals Inc (NASDAQ:AUPH) are soaring today, after the company announced a patent settlement agreement with Sun Pharmaceutical Industries Ltd (SUN) related to its lupus nephritis treatment drug, Lupkynis. At last glance, AUPH was up 38.9% at $5.99, on track for its best day in over three years if these gains hold.

Today’s bull gap has AUPH further distancing itself from its recent Dec.28 two-year low of $4.07, as well as breaking out of penny stock territory. Year-over-year, however, the equity is still down 73.5%. Plus, overhead pressure still lingers above at the 100-day moving average. 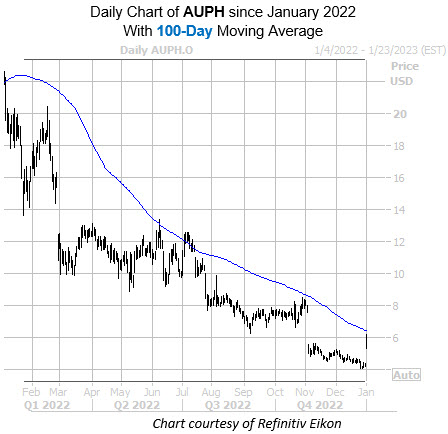 Call traders are blitzing the biotech name in response, with 10,000 calls across the tape so far, which is 14 times the average intraday amount. The January 8 call is the most popular, and also happens to be the second most popular open interest position.

Analysts are of similar sentiment on Aurinia Pharmaceuticals stock. Of the eight in coverage, six carry a “buy” or better rating. Plus, the 12-month consensus price target of $11.86 is a 99.6% premium to current levels.

It’s also worth noting that though short interest has begun to fall off over the past couple of weeks, it still represents 6.3% of the stock’s available float. It would take nearly four days to buy back these bearish bets, at AUPH’s average pace of trading.